Breast cancer is the most common cancer in women and the second most common cancer overall. It has a heterogeneous etiology ranging from genetic predisposition, lifestyle, environment, and gender, and is a major cause of death among women. There is an estimated 2+ million new cases of breast cancer every year, which accounts for ~12 percent of all new cases of cancer for women and men.1

According to National Cancer Institute, there are several factors that suggest a genetic contribution to both breast and gynecologic cancer, which include:

With a genetic evaluation of breast cancer, individuals can understand their hereditary predisposition to developing cancer and adopt protective measures for relatives. It’s important to note, both males and females can inherit and transmit an autosomal dominant cancer predisposition gene. In addition, oncologists can help direct their patients’ current treatment for breast cancer, prevention of developing other cancer mutations, and provide a risk diagnosis. 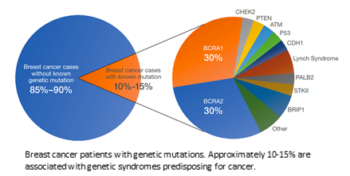 Seminal studies, from Dr. King et al. in 1990, identified BRCA1 as the cause of hereditary breast cancer using a labor-intensive linkage analysis in over 25,000 patients. Five years later, the BRCA2 gene was identified after investigating families with breast cancer who had no identifiable genetic variants in BRCA1. Both BRCA1 and BRCA2 genes are “caretaker” genes protecting and repairing our genome from DNA breakage.

Commercial testing for these two genes became available soon after in the mid-1990s, using traditional inefficient testing (which, at the time, was expensive). This testing was also mired by legal issues surrounding patent claims. In 2013, these patents were subsequently overturned by the Supreme Court of the United States.

Since then, testing for hereditary variants in patients with breast cancer has significantly evolved. With the discovery of additional high and moderate risk breast cancer genes combined with the advent of next-generation sequencing (NGS), testing of multiple genes can now be performed in a cost-effective and timely fashion.

Now, multiple gene panel testing for hereditary breast cancer is the standard-of-care for affected patients with a family history of breast cancer. These gene panels typically include high-risk and high-penetrant alleles. Various published guidelines and evidence-based clinical utility assessment studies state that genes with definitive evidence of an increased risk of breast cancer include:

Some of these genes may be related to high-penetrant cancer predisposition syndromes, such as Cowden syndrome (PTEN) and Li-Fraumeni syndrome (TP53); which is why family history and risk for other secondary malignancies need to be considered. Multi-disciplinary teams, including genetic counselors, collaborate to advise patients of surveillance, risk reduction prevention of next cancer, and protective measures for relatives.

Additionally, comprehensive gene panels are offered with expanded gene lists to include not only high-risk and high-penetrant genes but also newly described genes that have been described in literature. (BG links here).

Overall, Substantial progress has been made in the field of germline genetic testing to aid risk assessment in breast cancer. Multiple large consortiums have made significant contributions to the understanding of the risk of various cancers associated with pathogenic variants in breast cancer predisposition genes.

Today, genetic testing for patients at high-risk for breast cancer is no longer limited to BRCA1 and BRCA2 genes. With the development of NGS, multiple genes are being tested in a more efficient manner as standard-of-care for affected patients with family histories of cancer. Clinical knowledge of the pathogenicity and penetrance of genes are the most limiting factor of widespread adoption of large gene panels. However, multi-institutional consortiums like the National Institutes of Health-funded Clinical Genome Resource (ClinGen), where I am an investigator and co-chairman of ClinGen Somatic Cancer Workgroup, have contributed immensely to reviewing evidence and clinical validity of some of the genes in most cancer predisposition panels. In addition, ClinVar, a public database of human genetic variations currently has ~3,000 pathogenic variants of BRCA1 and ~ 3,700 pathogenic variants in BRCA2.

Additionally, new developments like polygenic risk scores could further add to refinement of breast cancer risk assessment. Although these tools are not yet widely adopted in clinical diagnostics, eventually they will help provide answers to important questions regarding the best approach for prevention, monitoring, and making therapeutic decisions to help individuals with breast cancer.

Shashikant Kulkarni
Dr. Shashikant Kulkarni, a hidden philosopher and life coach, has worked in medical genetics for more than 20 years.
Previous Post
Baylor Genetics Launches Combination Test for COVID-19 and Influenza A and B
Next Post
COVID-19 + The Flu: Knowing the Differences and How to Prepare
Menu
Our website uses cookies to give you the most relevant experience every time you visit. By clicking “Accept All,” you consent to the use of our cookies. To provide a controlled consent and more information, visit “Cookie Settings.”
Cookie SettingsAccept All
Manage consent

This website uses cookies to improve your experience while you navigate through the website. Out of these, the cookies that are categorized as necessary are stored on your browser as they are essential for the working of basic functionalities of the website. We also use third-party cookies that help us analyze and understand how you use this website. These cookies will be stored in your browser only with your consent. You also have the option to opt-out of these cookies. But opting out of some of these cookies may affect your browsing experience.
Necessary Always Enabled
Necessary cookies are absolutely essential for the website to function properly. These cookies ensure basic functionalities and security features of the website, anonymously.
Functional
Functional cookies help to perform certain functionalities like sharing the content of the website on social media platforms, collect feedbacks, and other third-party features.
Performance
Performance cookies are used to understand and analyze the key performance indexes of the website which helps in delivering a better user experience for the visitors.
Analytics
Analytical cookies are used to understand how visitors interact with the website. These cookies help provide information on metrics the number of visitors, bounce rate, traffic source, etc.
Advertisement
Advertisement cookies are used to provide visitors with relevant ads and marketing campaigns. These cookies track visitors across websites and collect information to provide customized ads.
Others
Other uncategorized cookies are those that are being analyzed and have not been classified into a category as yet.
SAVE & ACCEPT